There is just something about transition, a new decade (even though January 1st seems like it was already another decade ago), and a new mission to undergo a massive scaling of one’s company that requires a bit of a shakeup. Huge transformative shifts force all involved to level up and evolve for the better. They demand a heightened sense of commitment to excellence and discipline.

As they say, the things that got you here will rarely get you there.

The first 6 years of WIMS Consulting have been great, the company has grown double digits every single year (with 2 years at triple), and despite the state of the market, this year is already on track to achieve exponential growth compared to last year (in fact it economy appears to be helping it along even more as companies go all-in on digital). That said, I have still been playing too small and remain far from where I want the company to be yet. It is time to ramp things way up and kick things up another notch.

A rebrand is often mostly symbolic, it is a way to re-engineer how you would like the public to see and perceive your company, and to re-calibrate the first impression for those that do not know you yet. It also allows you to set the tone for current and future employees, partners, and clients. It is an opportunity to recommit and reestablish your values of who you are and who you aspire to be.

Up until this point we have been far from perfect and have certainly underdone some growing pains along the way. As difficult as it is to admit, not every single client project has exceeded expectations for one reason or another. On the flip side plenty of them have gone really well too. Regardless of which side the responsibility lies solely with us for better or worse. Moving forward, that level of accountability and transparency must be the standard. A rebrand is a way to draw a line in the sand, a demarcation to demonstrate that whatever happened before going forward this is the way we will do business no matter what.

Now for a little background and insight on the creative. The spartan warrior is a deeply personal symbol to me since I was young. For one, I grew up attending a school called Milton Hershey (from kindergarten to graduation), and it was our mascot. We learned about their culture and their values (mostly the romanticized and positive version, not as much of the negatives side of it).

Then when I watched the movie 300, wow what an impact it made. To see a group of soldiers, and a King no less, willingly sacrifice themselves with such honor and grace for the good of their tribe, it really stuck with me. I know it was embellished a bit as all movies are, but that didn’t take away from the impression it left.

Between Milton Hershey and the culture resonating so much throughout my life I even got a tattoo of the spartan helmet. For those reasons and others, it sounded like a great place to start when considering what I wanted my company to look like.

Fortunately, when leveraging history to inspire the future you can learn from, and remove, the negatives in order to improve upon an ideal, allowing you to adopt the things that translate. Further, WIMS Consulting is not adopting ALL their values after all (for one we are very much capitalists). “The word “spartan” means self-restrained, simple, frugal, and austere” plus they were clearly pretty violent and brutal. So again, it is not exactly a direct comparison.

The positive side, such as their discipline, commitment, team-oriented collaboration and community are things you build a company around. Others include being strategic, thoughtful, well organized, and assertive. They were creative in their approach to problem solving. The soldiers in their army were only as strong as the person standing next to them and the collective unit as a whole. They tempered the potentially corrosive nature of outsized individual egos. They played offense and defense equally well. They had an unwavering obligation to do whatever necessary to achieve a desired outcome.

Now THAT is what I want the WIMS Consulting cultural values to represent and embody. I want the company to uphold its commitment and dedication to its community (clients, employees, and partners) to that standard of excellence every single day and in every single project and task. This is the mindset required that will subsequently lead to producing outstanding work and deliverables for our clients. It certainly won’t be easy, but nothing worth doing really is.

Hopefully, we nailed that impression and give this perception with the logo and throughout the supplemental components of the branding. More importantly however, is that we maintain the standards and values in a clear and tangible way. Stay tuned for more, but I would love to hear what you think so far! 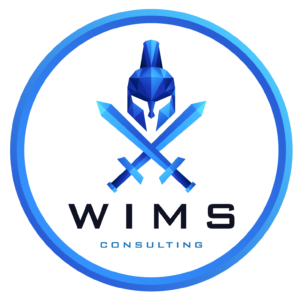